Matt grew up in the South and Midwest playing whatever sport was in season. 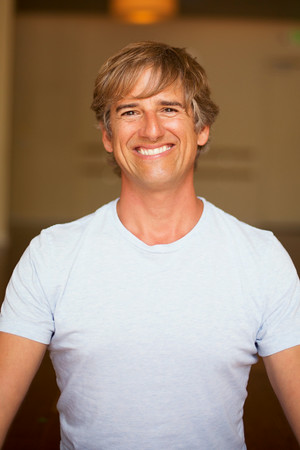 Baseball, Basketball, Soccer, Football, and Hockey. He ran Track and played golf while at Wheaton College in Chicago and graduated with a BA in Business and Economics. After a successful climb up the corporate ladder in the Minneapolis/Chicago area he gave it all up in search of his passion. He moved to California in 2001 and soon realized he was home.

Matt taught himself to surf and skateboard and then began practicing yoga. He quickly realized yoga improved nearly all aspects of his life, strengthening both his body and mind. Matt has earned over 1000 hours of yoga teacher training with Julie Rader through The Mukti Yoga School and is currently one of Mukti Yoga’s Senior Teachers. He enjoys sharing his love of yoga through teaching it to others. Matt has been teaching for 10 years and teaches both Vinyasa Flow Yoga as well as relaxing/rejuvenating yin yoga.

He has also had the benefit of working alongside some of the most renowned yoga teachers in the world, working at Glo.com since 2012.

Matt has taught the benefits of yoga, meditation and visualization to professional athletes, teams, youth and weekend warriors. Currently, he teaches meditation and mindfulness in workshops and privately. His students will attest to the amazing benefits, and his calming and peaceful energy. His positive energy inspires and encourages his students to live happier lives.

In addition to teaching yoga, Matt is a devoted husband and father. He follows his passions for cooking and the ocean by being on the Board of Directors for the local non profit Growing Great and by going in the ocean nearly every single day. He also leads Yoga and Service trips locally and around the world with his wife Chelsea who is also a yoga teacher.

Visit his You Tube channel for some helpful videos TheYogaMatt

Matt has also developed a 7 Step program to increase Health, Happiness and Sustainability. Please contact him for a private coaching session.

One thought on “About”